What is a Herniated Disc?

Discs cushion the small bones, known as vertebrae, within the back.  These diminutive discs have a tough exterior layer that encompasses the nucleus.  The discs absorb shocks from the spinal bones.  A disc that herniates, also referred to as a ruptured, slipped, or bulged disc, is a part of the nucleus of the disc that moves out from the annulus into the spinal canal when a rupture or tear that occurs within the annulus.

An injury or strain can lead to a herniated disc.  Disc material gradually degenerates throughout the aging process.  The ligaments that hold the disc in position weaken as time progresses, causing the disc to eventually rupture even with a seemingly minor twisting motion.  It must be noted certain patients are particularly likely to suffer from herniated disc issues.  One’s genetics play a significant role in the likelihood of a herniated disc. 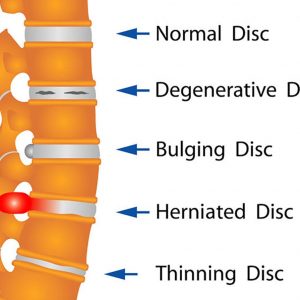 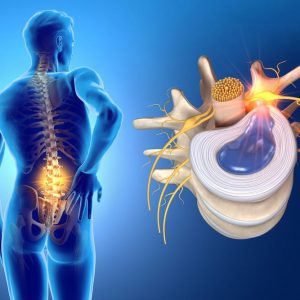 The symptoms of a herniated disc are not guaranteed to be the same with every single patient.  The magnitude of the herniation along with the disc’s position play a part in determining the symptoms.  If the disc does not pressure the nerve, there might be minimal pain or even no pain.

In general, frequent low back pain or a single instance of lumbar pain sets the stage for a herniated disc.  If the disc presses against the nerve, there will be weakness, numbness and/or pain.  This pain and numbness will move all the way to the body site where the nerve reaches, making life quite difficult due to ongoing pain.

The hope is that a herniated disc can be treated without surgical intervention.  If a reduction in activity level does not decrease spinal nerve inflammation and reduce the pain, nonsteroidal anti-inflammatory medication will be considered.  However, if the pain is significant, an epidural steroid injection with a spinal needle performed under x-ray guidance will transmit the medication to the specific point of disc herniation.

Physical therapy might also be helpful.  Some patients suffering from a herniated disc benefit from massage therapy, the application of heat or ice, stretching, pelvic traction and/or electrical muscle stimulation.  If necessary, surgery will be considered.  However, surgery is a last resort that is only explored if medications, physical therapy, and other treatment modalities do not work.

We are Accepting New Patients